When you’re planning a Disney Cruise you’re looking at all the ports of call and what types of activities you’ll be able to try or experience. No one wants to hear that your ship isn’t able to dock for the day, but as I experienced on our last cruise it does happen. So I’m sharing what happens when your port day is cancelled and you get an extra day at sea on a Disney Cruise.

Can your Port Day be cancelled on a Disney Cruise?

It was to be an early morning for us, Jamaica, but this is also the morning we woke to find out daughter sick, so we were scrambling to figure out what to do. We decided that Camden and I would go on our port adventure to bobsled and check out Dunns Falls. As we waited with our tickets at 7:15am at Enchanted Garden we realized that the ship hadn’t docked yet. A few minutes later we see a rep from Port Excursions who informs us that the ship hasn’t docked and it’s unclear if it will. If we don’t dock we’ll be refunded for our excursions and port fees and the Captain will make an announcement in about 30 minutes.

As we head back to our rooms moments later the Captain comes on throughout the entire ship and into the rooms to let us know that the decision has been made to not dock in Jamaica due to weather. At this moment I’m thankful that I booked through Disney for our excursion because they will take care of getting us back our money. The decision to not dock isn’t made easily, but the Captain feels it’s not safe and while it’s dissappointing I understand that safety is the number 1 priority. What does this mean for us though?

Well it means we get an extra Day at Sea and the Cruise Director and his staff work quickly to add things to the schedule and print out new Navigators. This also means a few additional adult tastings (which have an additional fee) and reservations for Palo or Remy brunch (additional fee).

As we look over the new navigator we begin to make our picks for what we would like to do. We manage to sign up for a Martini Tasting, I highlighted some Trivia, we explored the ship some more with the Mid-Ship Detective Agency, saw tons of character meet and greets and decide we’ll give Bingo a try. They also added extra screenings of the newly released Black Panther movie!

Playing Bingo was an experience. Let me start with Bingo isn’t free to play. That’s right you pay, but keep in my mind my excursion was cancelled and I would be getting back my port fees, so I decided to go for it. Prices start at $30, for paper cards, but I went for the electronic system. What’s great is kids can play this too, as long as an adult of 18 and over is with them. I mean the prizes are cash (AKA money to your room). We played 4 games and had a blast. We learned when you were 1 number away from Bingo you stood up and we had a moment where both Katie and I were standing and then BINGO, she won. So exciting. They were also giving away swag between the games and I won a DCL hat. Not as much fun a cash, but I’ll take it!

We also partook in a Martini tasting. Tastings on the ship have a tendency to sell out and are hard to get, but because this was added last moment we jumped at the chance and there were only 6 of us total. It was amazing. We had 5 mini martinis each and each one got better and better. For a fee of $20 we totally got our money’s worth in drinks, knowledge and fun.

After 5 martinis I wanted to test my knowledge in trivia so I headed to Pixar Trivia alone, but was greeted by 2 ladies who asked if I wanted to join their team. Sure and in the end we won. So I got a fancy WINNER medal, made new friends, and put by Pixar knowledge to the test.

Overall our cancelled port day and extra day at sea turned out to be pretty awesome and we all have a few of our favorite moments from the day. Disney did a great job of filling in with extra fun and tons of characters to keep us busy and having fun. So while we were bummed we didn’t get to ride a Jamaican bobsled we had a great day and totally made the most of the extra magic Disney added.

Of course I hope this doesn’t happen to you, but it’s good to know if it does you’ll still have an awesome time. Has this happened to you before?

Make sure you check out my other Disney Cruise Posts: 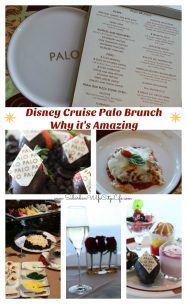