Here are some tips and tricks about entering the lottery and, if selected, maximizing your time at the White House Easter Egg Roll.

How to get tickets to the White House Easter Egg Roll

The White House Easter Egg Roll lottery for 2022 will close, Thursday, March 31st at 10am E.T.
To apply for the lottery or more information click HERE!

When is the White House Easter Egg Roll

The egg roll will take place on Monday, April 18th, 2022.
you’ll be informed if you won a lottery slot on April 7th. Good luck!
Guest Post by Karen Tong
I experienced White House Easter Egg Roll for the first time on April 21, 2014 with my husband and two kids, then ages 4.5 and 1.9. The 2014 theme was “Hop into Healthy, Swing into Shape,” part of the First Lady’s “Let’s Move” program.
Although Baltimore is only an hour north of the White House, we decided to stay at a hotel the night before to avoid early morning travel. The Marriott Residence Inn near George Washington University, which was just more than a mile to the Ellipse (the entry point for the Egg Roll event) worked great. We were aiming to arrive at the gates around 6:45, which meant leaving the hotel around 6:15 to walk over.

Should I bring a stroller to the WH Easter Egg Roll?

Because the event was on grass, we decided to use a jogging stroller for our almost-two-year-old son. It was a wise decision and served us well throughout the morning. Because of the uneven ground, I don’t recommend using an umbrella stroller as it will be hard to push on the grass. And, it was great to have a stroller basket to put everything we collected during the event.

What to know for the White House Easter Egg Roll

Once we arrived, we were pleasantly greeted by many staff who directed us. Lots of other people were already there in line. Some kids were dressed in fancy outfits, and others were more practical in clothes better suited for the activities. The morning had started out more brisk and chillier than I’d anticipated, and I opted for warmth over fashion.
Going through security, the line moved well and the kids didn’t get bored. I’d brought some snacks and bagels to eat while we waited. The event information had stated not to bring food or drinks inside, but we made it through the metal detectors and had our bags checked, and our food and drinks made it through without issue. The jogging stroller just fit through the metal detector, and our diaper bag was fine to bring in. After security, there was more staff offering bags with programs and maps. And, they had permanent markers on hand so that every parent could write his or her cell phone number on their child’s wristband.
The Pre-Party
As we walked toward the South Lawn, we found a beverage station where we could get complimentary juice pouches and bottled water. Ahead, we could hear music and see Angry Birds mascots dancing. The excitement was building! We made it to the next gate and got in line to wait our turn to enter the South Lawn. We used that time to read the map and strategize what to do first. It wasn’t too long before the lines started moving and people were allowed on the South Lawn by 7:30.

Time to Have Fun
Other experienced Egg Rollers had suggested that we pick two or three activities to do, and anything on top of that would be a bonus. We decided to head straight for the Egg Roll to check that off the list. We got very distracted along the way. There were mascots and characters galore! Some of the characters had short lines forming for photo opportunities. We finally made our way in line for the Egg Roll, and a minute later it was our turn. Staff members guided the kids and directed parents where to stand to maximize the photo opportunities with the White House in the background.

What is the White House Egg Roll?

The Egg Roll is a race where kids use wooden spoons to push hard boiled eggs down their lane. At the end, each child receives a commemorative poster as their prize.

After our successful egg roll, we headed to the egg hunt, which was designed for kids age 5 and under. We waited in line for a few minutes as groups made their way through the hunt. There was a fenced area filled with hay and the eggs were hidden under the hay. Kids were given baskets to collect their eggs in. The goal was the find the golden egg to win a prize. In the end, both my kids saw the golden egg but it ended up in my son’s basket. He was the big winner! My daughter had found two wooden eggs which she got to keep. Since they both “won” the egg hunt, they got to pick souvenir embroidered canvas Lands’ End Easter totes. He copied her and insisted on having a pink (not blue) bag. The bags had Easter eggs embroidered on one side and the Egg Roll logo on the other.

Next, we headed to hear story time with Jim Carrey. The kids also did an obstacle course and we visited the Farmers Market. Walmart was giving out free apples, bananas and oranges, along with recipe cards. We checked out the White House garden and the bee apiary. Our next stop was the arts and crafts station, where my daughter decorated an egg magnet.
All along the way, there were staff people to direct us and answer questions. There was a beverage station inside where Coca-Cola was giving away free water and vitamin water. There were diaper changing stations inside small tents. Luckily we didn’t need to use the First Aid tent or the Family Reunion tent for lost kids.
Time to Go
We had made the most of our morning at the White House Easter Egg Roll. We planned well and set realistic expectations. It was a fun-filled, exciting morning. Overall, the event was a class act. It was well staffed and organized. There were a lot of guests, but we didn’t wait long for anything, and there was plenty for everyone to do. It felt busy and exciting, not over crowded. We didn’t have enough time for yoga, the Sesame Street performance, or the celebrity chef cooking demonstrations and a few other things. And, we didn’t see the Obamas (or dogs Bo and Sunny) or get to thank them for having us.

On the way out, each child received a wooden commemorative egg and Peeps candy. This year, the eggs were orange. I heard that they’re a different color each year. I’m glad they were all the same color so that there were no fights over egg color.

The lottery usually happens more than a month before the event. I set up a Google alert (such as for “White House Easter Egg Roll lottery”) so that I don’t miss it. The lottery sign ups are done on recreation.gov. If we ever get to go again, there isn’t much I’d do differently! It was a special day and I’m grateful that my family got to experience it together.
Karen Tong is a mother of two and works in marketing and communications in Baltimore, Maryland.
This post was originally published April 23rd, 2014
Looking for Easter Egg basket filler ideas? 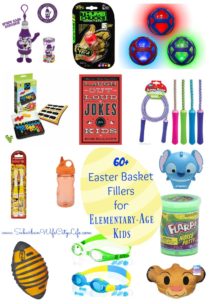