Alice Through the Looking Glass Q&A with Colleen Atwood

There’s something special about Disney’s movie Alice Through the Looking Glass, out on DVD and Blu-Ray. It’s a magical story with wonder, amazement and belief. Part of the story is also told through the beautiful and colorful costumes and I had the opportunity to sit down at a round table for a Q&A with the costume designer, Colleen Atwood.

If you don’t recognize the name Colleen Atwood, you know her work. She’s done multiple movies with Johnny Depp, Memori, and both Alice in Wonderland and Alice Through the Looking Glass. Her career spans over 20 years, but she didn’t grow up wanting to be in fashion or designing clothes. It was actually when her daughter was grown that she figured out this was something she wanted to do and with $500 set off on the adventure. To hear how she worked different jobs over the years and at one point wanted to do art reminds me that we’re constantly changing and creating.

When asked about her inspiration for some of the costumes she mentions walking through vintage stores and flea markets and looking for unique pieces that will help move the story along and develop the character. The Hatter wears a sash of vintage spools and Time wears smalls clocks on his hand, all adding even more details and depth to the characters. These were all things she found in flea markets. 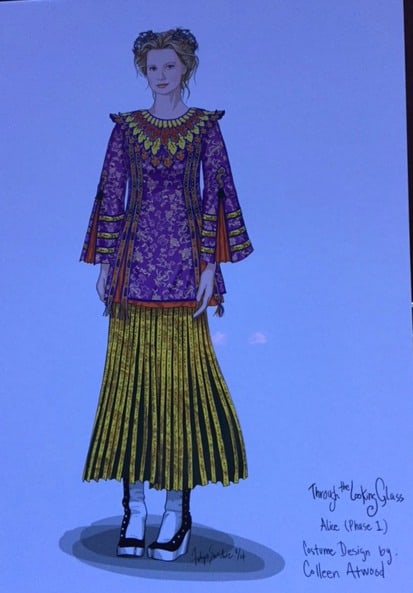 Speaking of details, Atwood is know for them. Alice wears a Chinese inspired tunic with the letters A, rabbits, and hats embroidered in it that are barley seen on camera, but she finds it important to give the actors these details. There’s also the Queen of Hearts, she has her created a dress that looks feminine, but ready for battle with hearts hidden within. The Hatter has a pin cushion ring, and I’m sure so many more.

There was also something I noticed when I watched the film that I found surprising for the era. Alice wears pants for all of her costumes. For the time period that would not happen, but Atwood said it was important to her that Alice wear pants. Not only is she very active and it’s easier for the actress, but it was a way to show Alice’s strength and leadership. It was also nice to have a fantasy world where she could create things that the Hatter would approve. I personally love her Captains coat and the piping along the back she wears in the beginning.

I asked her about designing for film and movement, and she explained that over the years she’s learned about layering different textures and fabrics and how to design for the different lighting the costumes will endure. This also made me wonder about designing for some of the CGI characters. I loved hearing that sometimes she will create a costume for the character to help move the process along and allow the designers to understand better.

It was a wonderful opportunity to sit down and talk and I could have kept her all afternoon continuing to ask more questions and learn more about her process and ideas. For me I walked away feeling inspired. Not only to watch the movie again, which is amazing, but to also get behind my sewing machine and create. To think outside of the pattern, mix and match and maybe even host a tea party with friends!