Mean Girls on Broadway Is it Fetch? 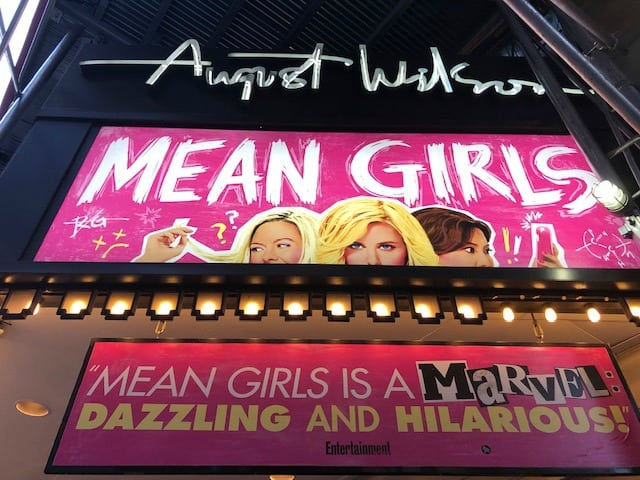 When I hear my favorite movies are being made into Broadway musicals I usually take pause. So a classic like Mean Girls on Broadway makes me ask is it Fetch? Let me tell you what I think and I’ve a discount code to save you some money!

I remember heading to the movie theater with a girlfriend to see the original movie, so it only seemed fitting that I would see the Broadway show with a friend. It’s fun to have a date night, but to have “mom’s night out” to laugh and smile is pretty fetch!

If you’re unfamiliar with the movie or show it’s based off the book The Queen Bee and Wannabes by Rosaline Wiseman. Tina Fey adapted it into the movie Mean Girls in 2004 and then in 2017 Mean Girls the musical was created.

The story goes something like this Cady Heron leaves the wild of Africa to come to Chicago to go to high school. Having been home schooled she quickly realizes that the animal behavior of the safari aren’t that much different than high school. Figuring out who to sit with, what to wear (on Wednesdays it’s pink) and what the real meaning of friendship is all mixed into the story.

What I love about this show is how relevant and perceptive it is to today. Watching this show I’m reminded that my kids will soon be entering into the dynamics of middle/high school and things will be different than how I grew up. Of course they pepper in some great one liners, musical numbers and more through out the show making 2 and a half hours fly by.

When it comes to cast it is the beez knees. The talent, comedy, dancing, and singing will knock your socks off. I had quite a few numbers where I was tapping my toes or laughing, or just mesmerized by the cast.  I think one of my favorite numbers was at the top of Act 2, but then as I think about it more I keep remembering more fun moments. The creative team did an awesome job with all aspects of the show, and it’s clear that they were fan of the movie and wanted this to be special. I can’t wait to take my daughter when she’s a teenager!

To me seeing a show is something I really like to immerse myself into. So of course I wore pink, and then when I used the restroom I was inspired by a few quotes they had around the area.

Plus a little inside scoop for you as I was able to head backstage after the show. They use a set piece of 3 bathroom doors throughout the show and you’ll never see this, but on the back of the doors there are some awesome signatures and notes!

If you’re not visiting NYC then make sure you check your local theaters because the National Tour has launched and it’s a great night of fun for a Mom’s night out or if you want to do something fun with your teen.

Tell me are you a fan of Mean Girls?