A carousel is not only an enjoyable ride for all, but it’s also history, and today I’m focusing in on one of the most famous, the King Arthur Carrousel in Frontiertown at Disneyland.

It was a merry-go-round in Griffith Park that gave Walt Disney the idea to open Disneyland, a place where children and parents could ride rides together, and from there the journey began.

This carousel is over 100 hundred year old and was in an amusement park in Toronto Canada. Disney purchased this carousel and had it restored by the Dentzel family in Philadelphia. Where he has many modifications made to it. One big one was having all the animals be horses.

The carousel is rare because it’s been modified so all of the hand carved horses move, and all of them are also jumpers. Plus all of the horses are painted white, because it proved to be such a popular choice. Disney also had it modified so each row would have 4 horses instead of 3 and there are 2 carriages so it’s ADA compliant.

The horses also all have names. You can get a full list of the names in alphabetical order from City Hall. You can also ask the cast member working the ride for the horse book. It’s a book that shows you a picture of each horse and what it’s named.

The head ringleader is Jingles, Lillian Disney’s favorite horse. She’s covered in belles, and for the 50th anniversary she got a new saddle that was dedicated by Ms. Mary Poppins. Sadly she was being restored while we were visiting. So we picked to ride Champion: Walt Disney’s favorite horse because he has a gold tooth and looks like he’s fit and raring to go.

Ever wonder how fast you’re going on the carousel? Well the speed of the horses is 4.4 MPH. You’re also listening to various Disney tunes that come from an organ behind the Dumbo ride.

I love knowing that my kids will grow up riding carousels and look back on pictures to remind them of the joy and fun we had riding while visiting Disneyland. I also look forward to the memories we’ll make as a family visiting this carousel and stopping to take a family photo with the Sword and the Stone!

Do you have any fun facts about the King Arthur Carrousel in Disneyland?

Looking for other Disneyland posts? Check out 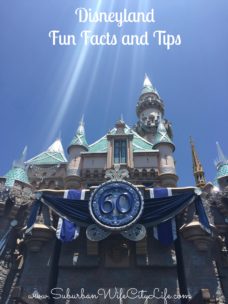 Disclosure: I was given 2 press passes for the day to explore Disneyland and share my thoughts and views.